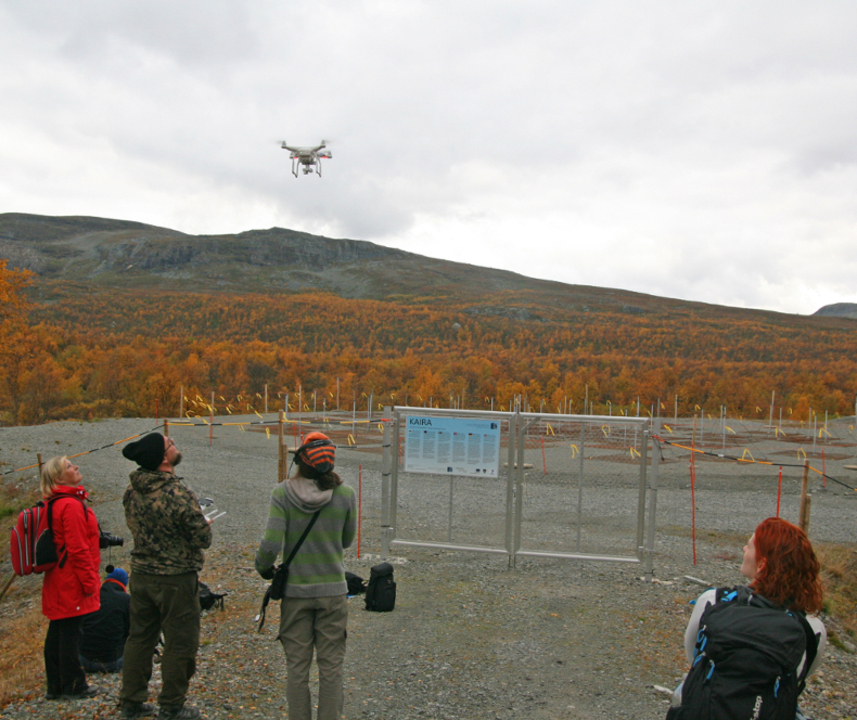 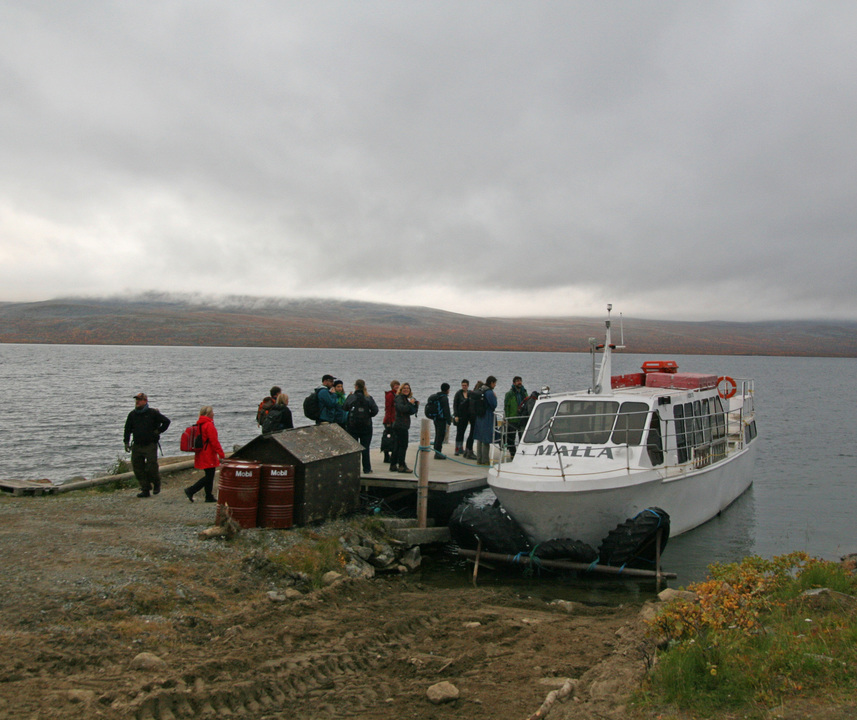 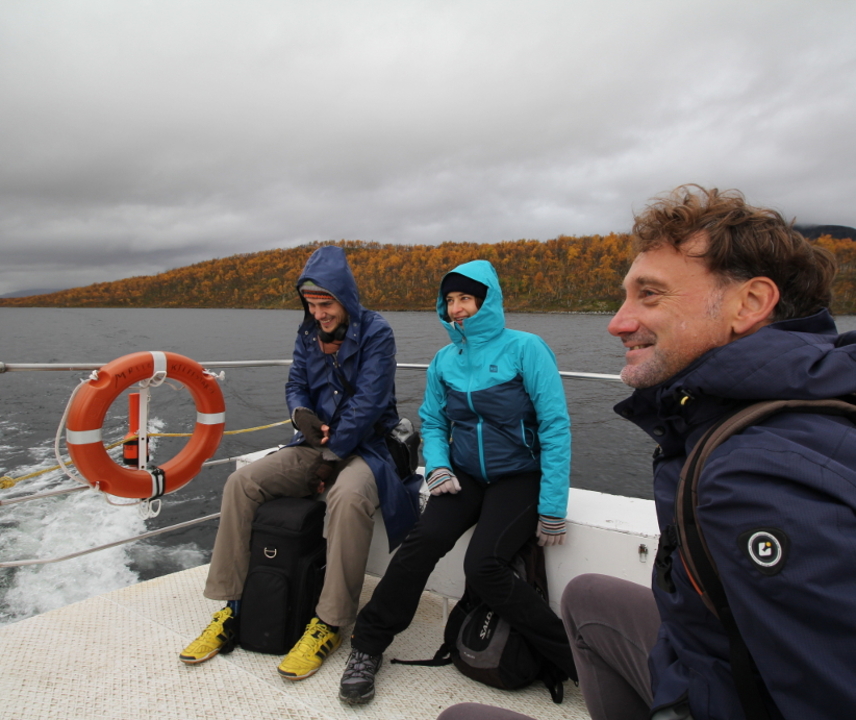 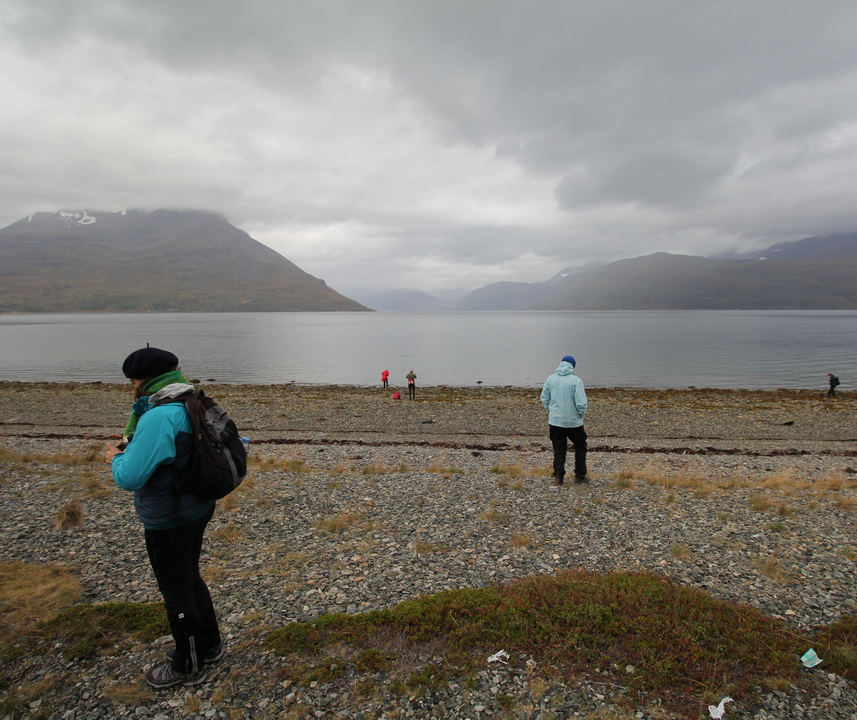 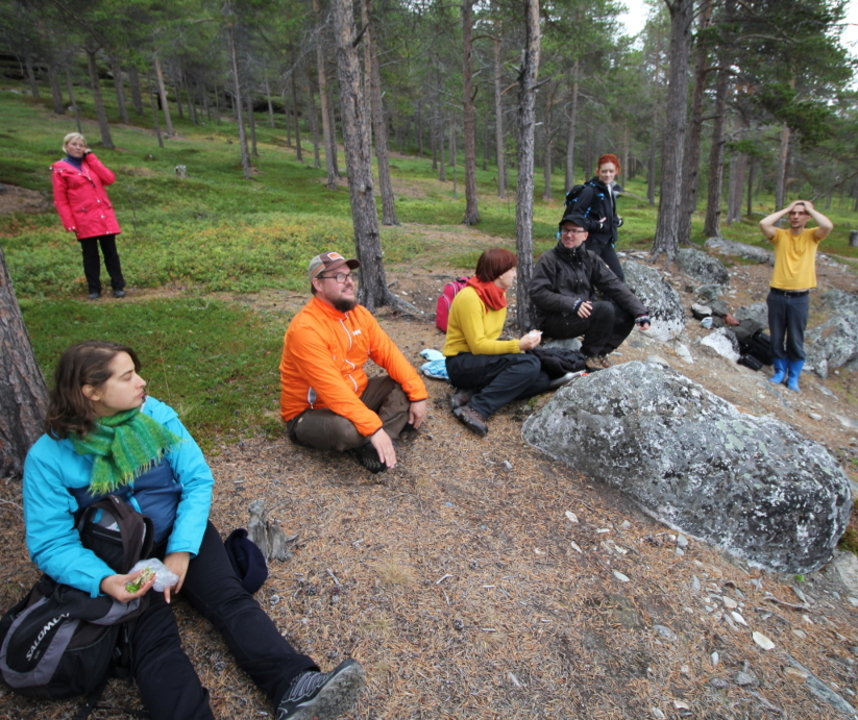 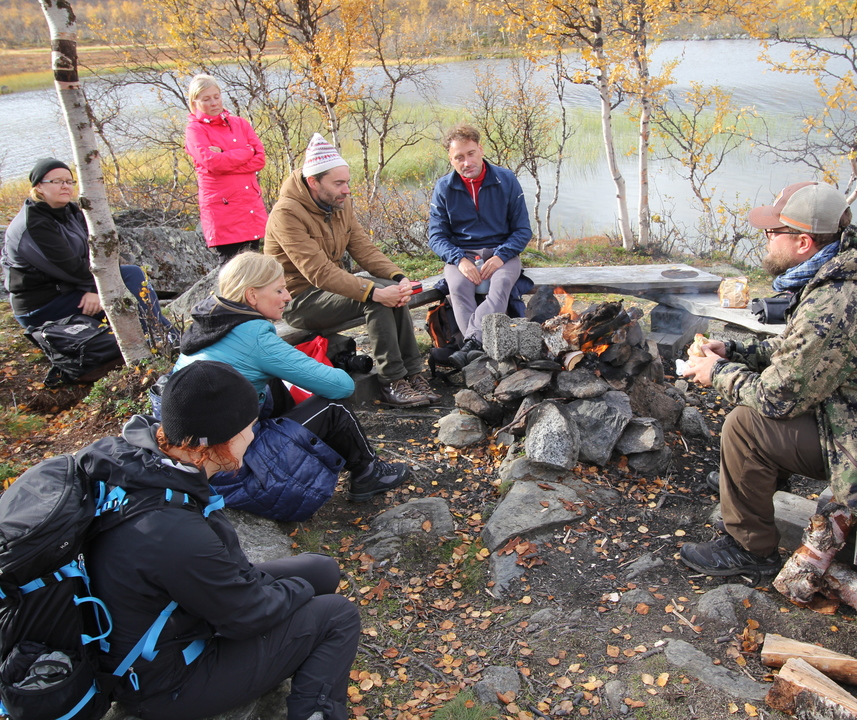 This group explored the landscape around Kilpisjärvi. Part of the focus of our group was to find and study the layers of Hybrid ecology; where biological, technological and cultural layers are coexisting and influencing each other in the landscape. Our team set out on several days of fieldwork in the Kilpisjärvi environs. Each group member uncovered layers of the landscape through their own perspective and practice, exploring the sonic, political, microbial, visual, and invisible aspects of the layers.

On the first day, the group's host Antti Tenetz guides us on a walk through sites that show traces of human influence in what we would normally perceive as pristine nature. We start at the site with debris of German barracks from WW2. From there on as the group climbed up the slope of Saana fjell, we crossed a border of habitats, from the arctic to the alpine.

In the alpine biome above the tree-line, the metabolism of vegetation is so slow that a WW2 Junker's air-plane crash site remains clearly visible almost 80 years after the event. The black scarred soil looks almost as fresh as if it happened weeks ago. Sifting through the molten pieces of aluminium and steel raised ethical questions about taking samples home. Somehow they seem to have blended in with the natural surroundings, merging artificial and biological layers into a hybrid site. 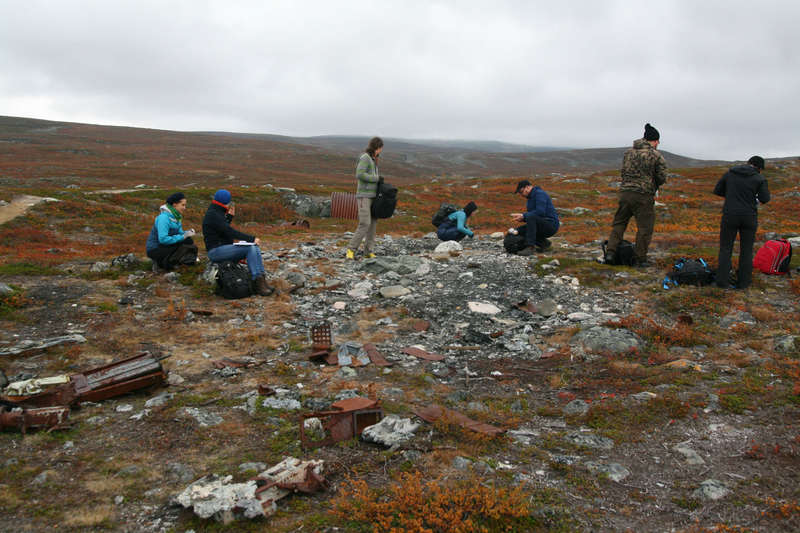 Anssi the composer in our group was immediately drawn to this site. All physical objects have their own sonic resonant frequency, which is attributed to the size and volumetric mass density of the object. This would make the Junker's site an ideal spot for recording percussive metallic sounds of different pitch and tone. 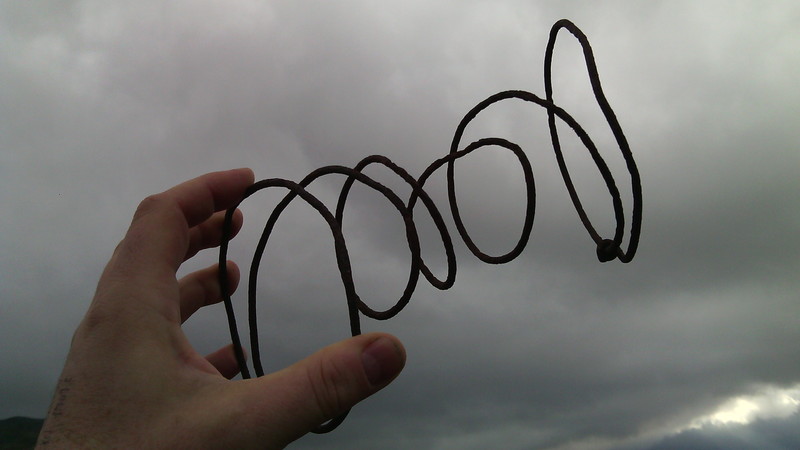 Anssi recorded over 90 different audio samples from various fragments of aluminium and steel on the site. The samples were later processed to become one of the sonic layers of the interactive sound art installation that he exhibited at the Biological station on the last day of our visit there.

Our explorations in the land were enriched by a discussion on broad interpretation of mapping including local oral traditions. We talked about mapping practices and motivations behind mapping, both for our own artistic work and historically. In his presentation at the biological station, Antti showed us the Olaus Magnus' Carta Magnus (AD1529), describing it as a martially and politically motivated economical map of Scandinavia. A map as a hybrid geography overlaying actual locations of the time, with highly subjective and even mythical layers. With this beautiful example Antti guided our discussion towards the subjective scaling and data selection process inherent in

map-making; what to present and how does that relate to the background it is presented on. We also discussed the invisible layers in the landscape. 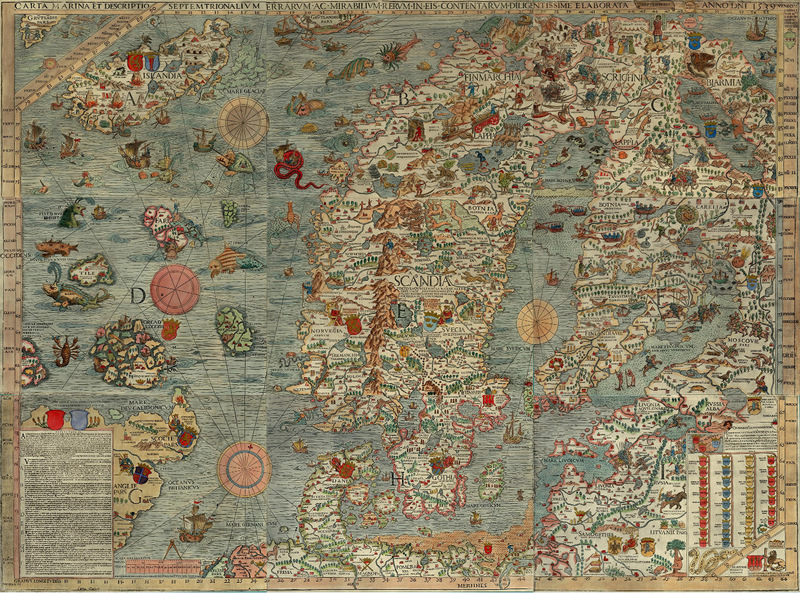 Representing invisible layers of Hybrid ecology were the two very high frequency antenna field arrays we visited. The KAIRA (Kilpisjärvi Atmospheric Imaging Receiver Array) site is like a small neighbourhood of mysterious rectangular structures beyond a wire fence, physical access tantalizingly forbidden (but breached by Antti's overhead drone photography). We also explored the still-in-use older precedent of KAIRA, just down the road, a field of dozens of antenna poles one can wander freely amongst, under a canopy of guy-lines somewhat resembling an overdesigned clothesline. 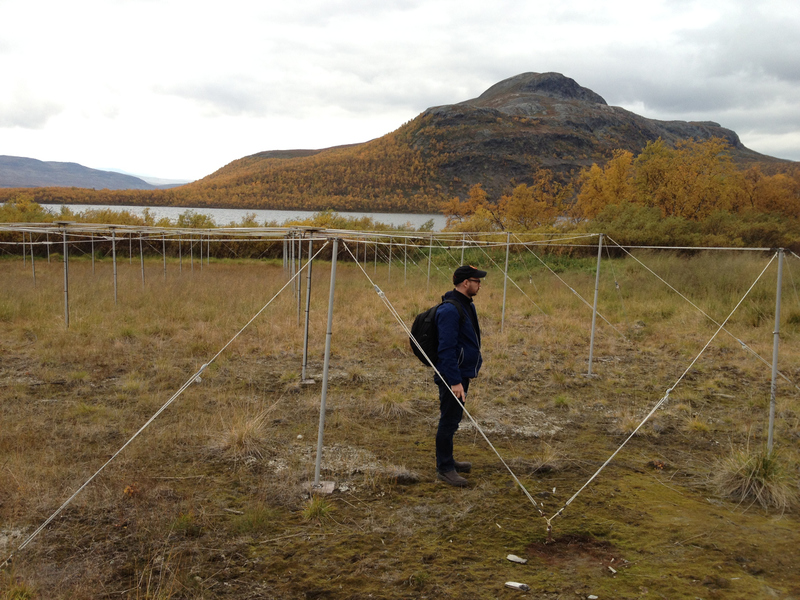 Peter at the older antenna array

Due to standing interests in electromagnetic activity of all kinds, Peter was particularly attracted to the two VHF antenna arrays. KAIRA studies the ionsphere from the ground, receiving "incoherent scatter" radar beams sent by a sister station in Tromsø, bounced off electron fields in the upper atmosphere. The idea of using a "randomly perturbed" field to indirectly coax valuable information from something distant and nearly inaccessible while remaining grounded is an apt metaphor for many research methodologies in the arts and incoherent scatter ought to be co-opted as buzzword/ personal mantra.

Peter also created a makeshift loop antenna from a reindeer antler and copper wire. One windy afternoon he and Maia climbed to the top of Saana fjell and used the "Antlenna" to record electromagnetic waves. 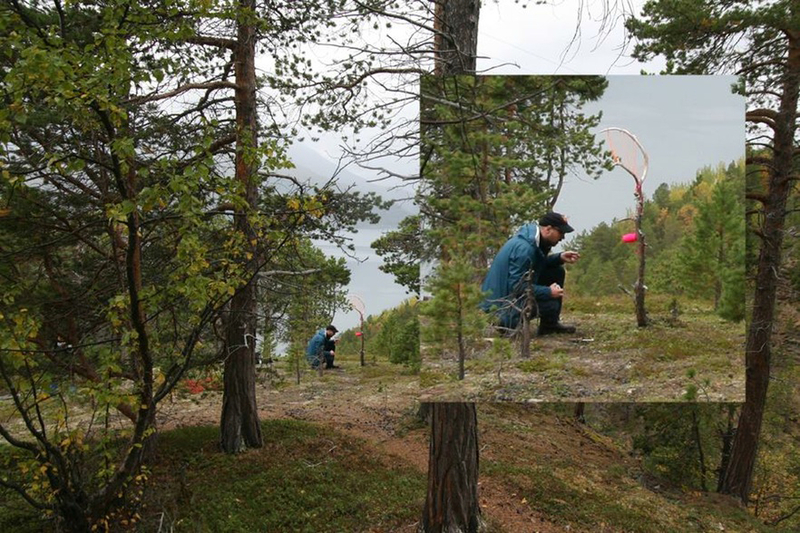 Peter with the Antlenna near Lyngen Fjord in Norway

Our group visited the three country cairn, where Finland, Sweden and Norway meet. On our hike to the cairn we could see a fence, built to stop the movement of reindeer, from Finland to Norway and Sweden. 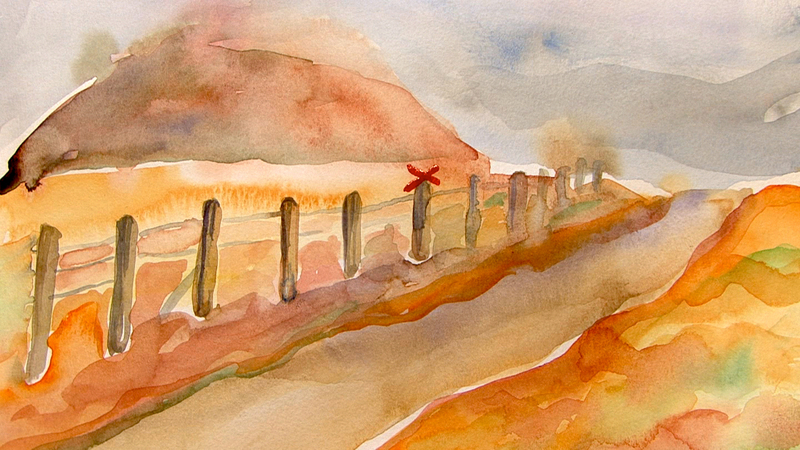 Maia became interested in the border and how that single line causes the cultural, political and biological realms to meet, interact, clash, and change. In the Arctic the knowledge of the traditional reindeer herding Sami culture gave her a clear insight of how the borders have influenced people's cultures and the ecosystem.

Maia interviewed Oula, a Sami reindeer herder, who said “reindeer is a very high tech animal.” Oula explained that traditionally in the summer reindeer moved to the North, to the sea, where there are less insects and the vegetation is rich in nutrition. In the winter they moved to the warmer south where they fed on pine trees. Both the reindeer and the ecosystem's health depended on this large movement. Sami people had started following the reindeer and were dependent on them for survival. Oula recounted some of the political events from the last 200 years and how they led to the establishment of more firm country borders which restricted the Sami and consequently the movement of the reindeer. After leaving Kilpisjärvi, Maia edited Field Notes: Borders a video with people's interviews and a watercolour animation that illustrates her findings. (link of video coming soon)

Piibe's personal inquiry had quite narrow shift - to take water samples from different water bodies and to explore them later in the lab with a microscope. She had planned to study the arctic waters, since they would be an interesting addition to the studies she had done before. The microorganisms could also be seen as one of the invisible biological layers of an area. She collected the water samples from creeks and marsh pools, by putting them in water bottles and exploring them more precisely later. 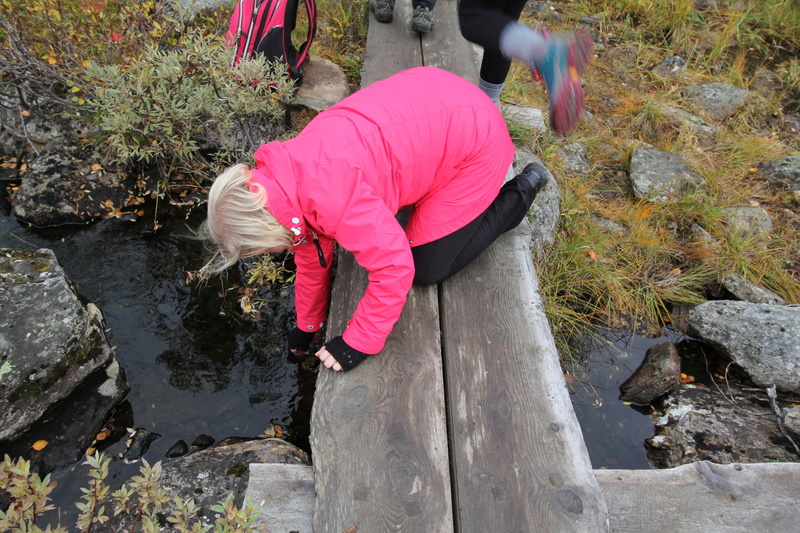 When she returned to Tallinn and went to the Lab of TUT Marine Institute (Estonia) to explore Kilpisjärvi waters, she got to know that there has been very long and thorough research done by Estonian scientists about Kilpisjärvi waters recently. Piibe met one of the scientists that participated in the project and had the great opportunity to share her fresh memories, pictures and feelings with her, since the scientist did her work without being in Kilpisjärvi herself.

Theun mapped the landscape linguistically into several categories starting with Actions through which the landscape and organism expresses itself, then moving into Textures, Shapes, Viewpoints and finally into Realms. The process made it clear how crucial it was to have local knowledge such as Antti's in the mapping process. Without that the mapping would remain superficial. This list of words was recorded by Peter and became an abstract geographic poem describing the Kilpisjärvi area.

When our group sat down to discuss the possibility of artistic collaboration based on what they had experienced in the Arctic, Theun shared his list of words about the landscape. The list was a point of departure for Lori to use her LEDs to light paint Theun's words into the landscape. Theun's list of words was converted into handwritten digital images in order to play across the LED array that Lori uses in her practice. The next day, Peter and Lori took off for the sauna, hoping that the sauna's porch would protect the technology from weather, while also being able to photograph in the landscape. When the misty morning turned out to be too bright for the LEDs, they moved to the kota. 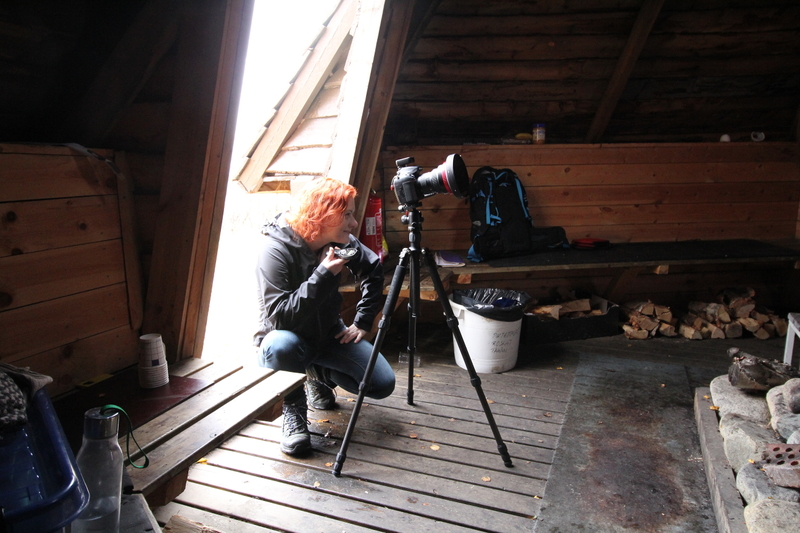 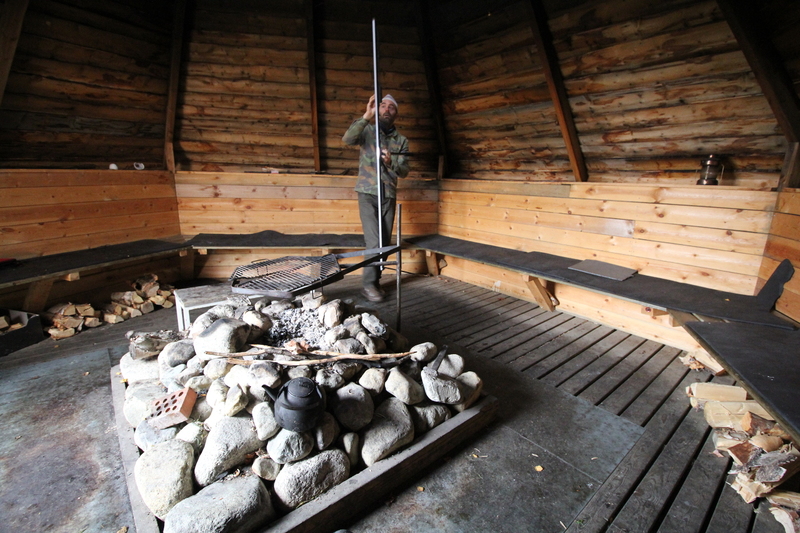 Using the pine-paneled interior of the hut was a great backdrop to light-paint the text across. Over the next few hours, Lori, Theun and Peter took turns using the LEDs to draw all of the 307 text files across the kota, which resulted in photographs where the people disappear and the words are left floating across the space. The group plans to continue collaborating in order to combine the images and audio into a video piece that might also include other layers of content from our group. 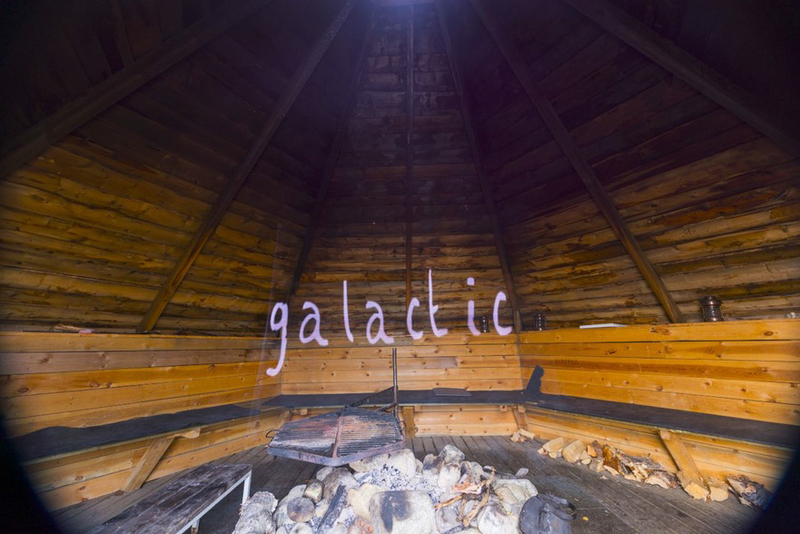