Field_Notes - HYBRID MATTERs
Notes from the field (and more questions) 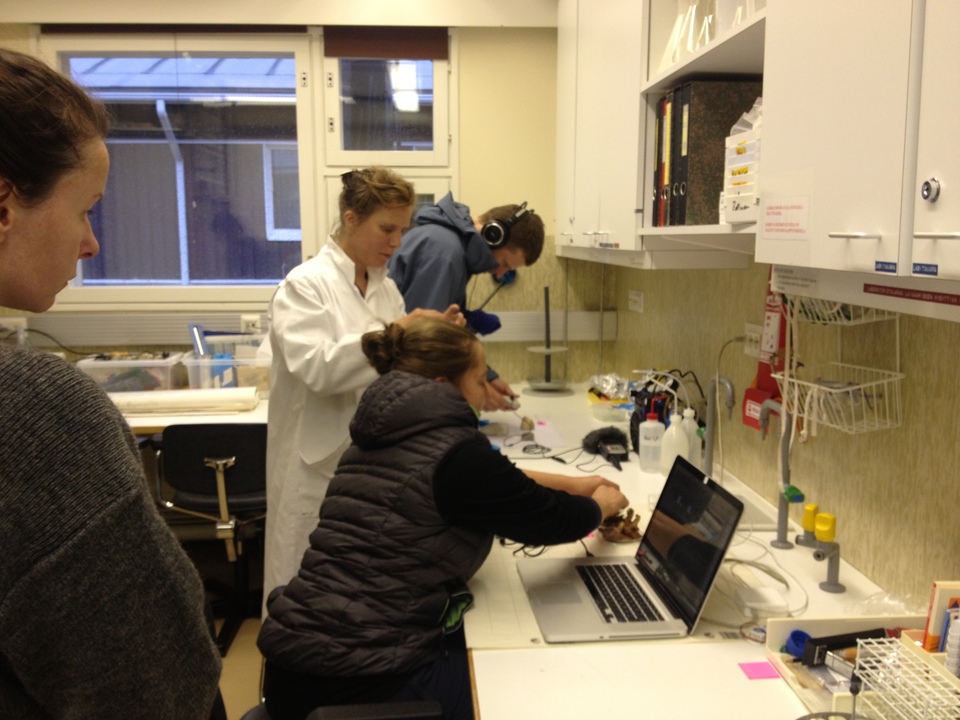 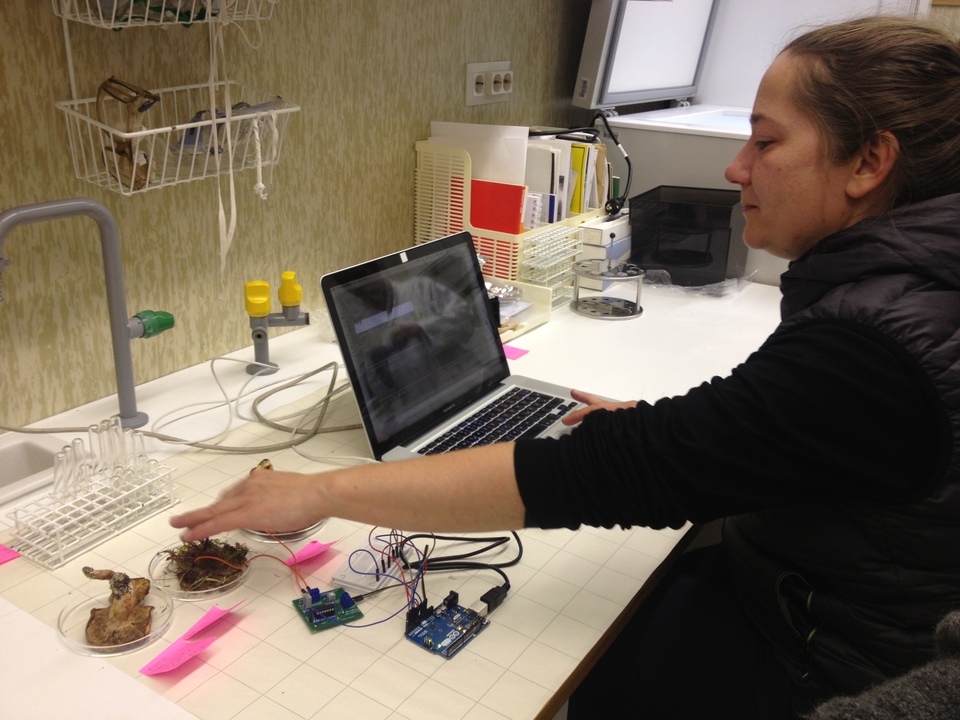 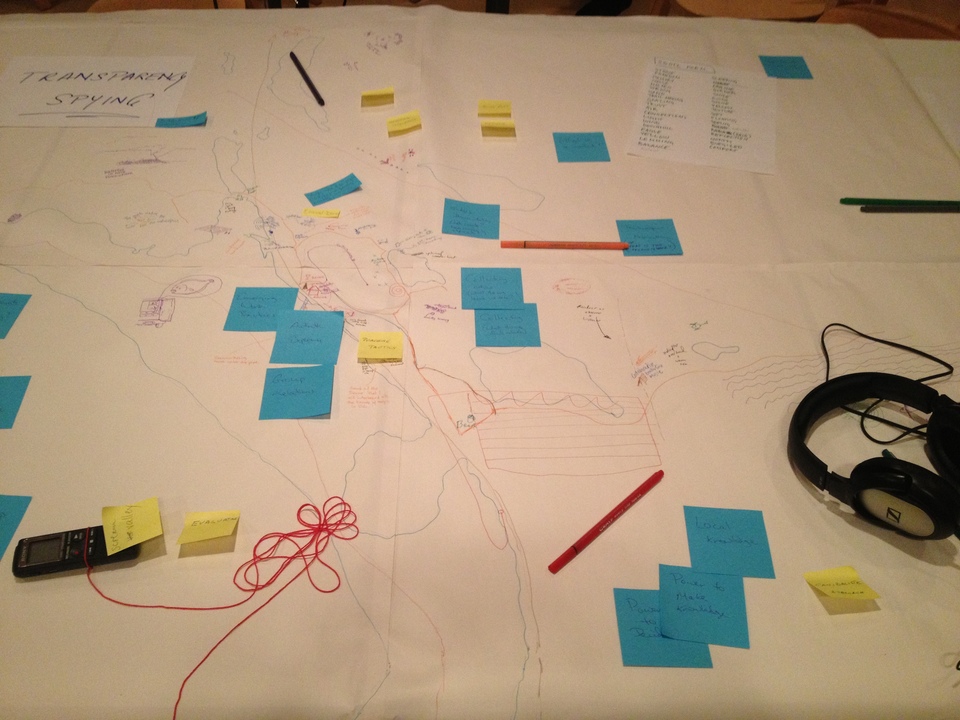 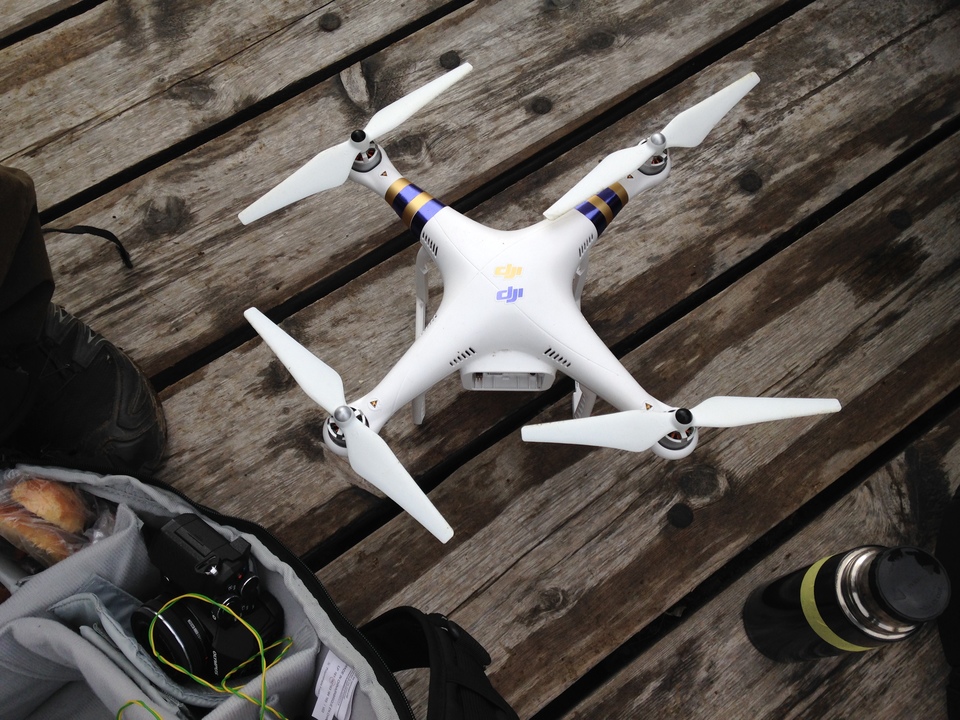 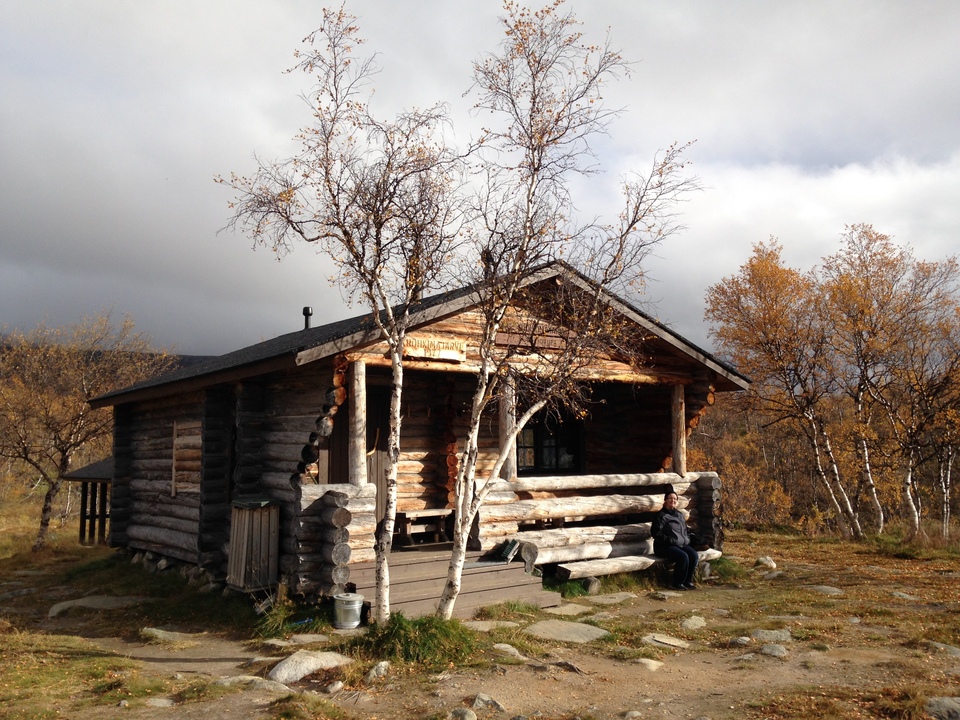 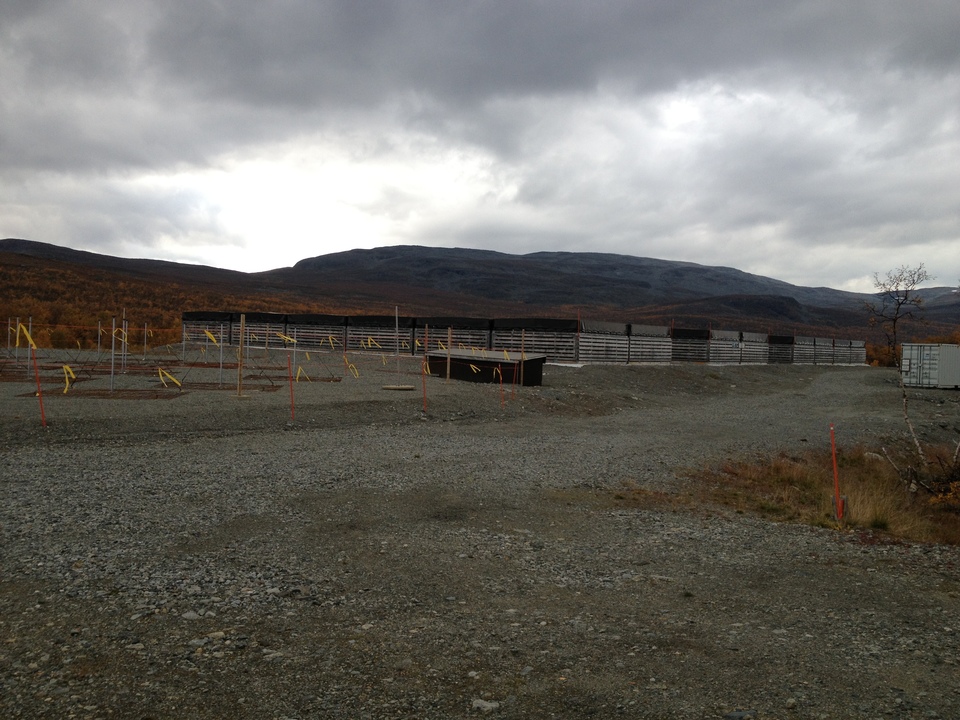 ‘Hybrid Species’ was introduced by Antti Tenetz, the host of the group Encounters in a Layered Landscape (‘my probands’), on our first walk together. For him the wolf has become such a hybrid species, once being useful for the herders to keep the animals together, but since herding technologies have changed, the wolf has turned into a threat. Social hybridity, as the wolf example could be also called, turned out to be a key term for the Second Order Group (SO) of the third edition of Field_Notes on Hybrid Matters. 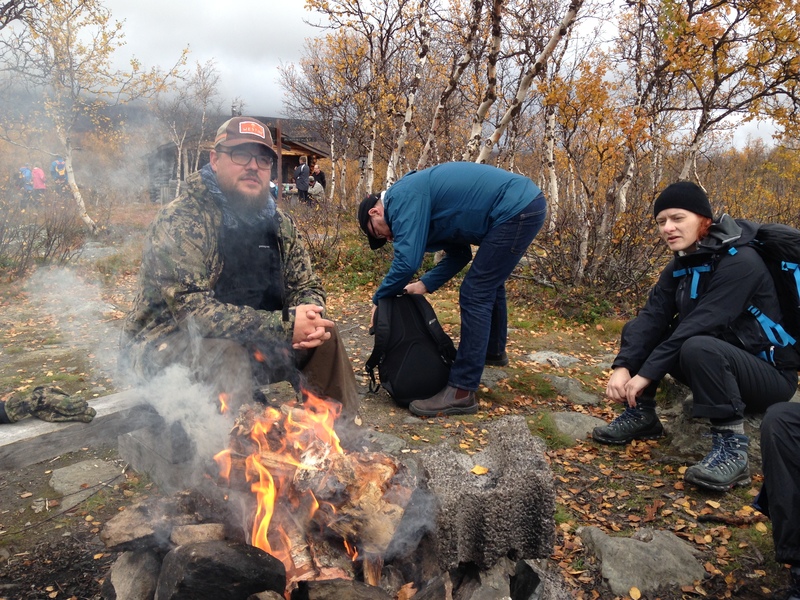 The gentle landscape in the North of Lapland around Lake Kilpisjärvi itself is quite poor of animals, at least in autumn. One can find a lot of blue(berried) bird shit but rarely birds. Seeing a Hawk Owl on our first day was therefore quite an encounter. I wish it was the Great Grey Owl, since it is called Strix Nebulosa, which may have been a fantastic reference of how the Second Order Group was perceived in the beginning: a nebulous component of Field_Notes, who had to research the social order of people engaging with the landscape’s order. But let me make a reference with the fact that interestingly Hawk Owls are not nocturnal. Humans have created various devices over centuries to ‘resolve’ that problem. Vita Activa (as Hannah Arendt calls our age) has produced a maximum distance between us and ourselves. We invented tools to detach us from earth by creating almost a cosmic exile, from which we can observe ourselves with satellites looking down at us day and night.

Michel Serres’ book The Parasite, which Miguel Santos suggested to us to read beforehand, seemed to be a productive way to reflect on our roles within the complexity of the weeks’ topics. Many more interesting terms appeared in our SO group sessions throughout the week like the anti-narcissistic view (introduced by Jens Hauser). But let me stick with The Parasite.

Serres' primary argument is that the relationship between a parasite and its host serves as a useful model for all forms of social, cultural and technological mediation. Instead of conceptualizing social relations according to the model of exchange Serres argues that all acts of exchange are actually based also on exploitation, because "exchange is always weighed, measured, calculated, taking into account a relation without exchange".[1] The French word "parasite" also signifies noise or static, which enables Serres to extend his argument to communication systems. Instead of seeing communication as a two-way process the author argues that every channel also contains an element of interference, which constantly threatens to disrupt the signal. Such disruptions are potentially productive, as they result in the formation of a new system. 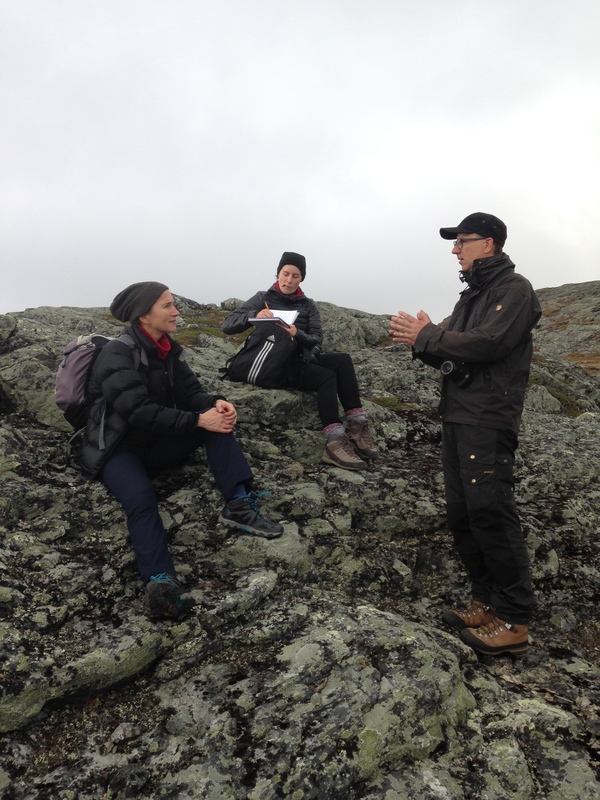 The model of parasitism, to summarize the book, is to have no model. Its relations are always local and “ready made”. And this is what SO was about: deriving and stepping out from orderly systems and familiar perceptions into moments of hybridity of (un)intentional relations of human and non-human matters. According to Timothy Morton matters are always ‘weird’, because we can scale any matter up to the universe or scale it down to its subatomic components. In this logic to think about matters’ hybridity may be even ‘weirder’.

A matter of commodification?

The Layered Landscape Group encountered quite a few traces, signs and forms of interference communication (like a plane crash site from WWII). The radio antenna field of KAIRA, a hi-tech atmospheric observatory close to the Station, our last stop on our first day is gated and tells us: stay out. Some of us gazed in, some tried to record radio scatter sounds, some sat down and watched Antti’s drone parasiting the observatory’s territory. Who exactly is able to stay in or out of which territory and of which (hi)story, what regimes govern them? Private property? Public interest? Ecological forces? Human forces? Territory is a relatively new term of earth’s history. Before that landscapes were conceived as endless, unframeable, respectable, sometimes nebulous or as mystic matters. Parallel with the concept of ‘framed’ nature, its commodification appeared. Growth became more relevant to describe human accumulation than that of nature. According to the nature’s changes Lapland has eight seasons. According to the people who live in Kilpisjärvi it has only two: the tourist season and non-tourist season.

Kilpisjärvi is a young settlement. The village was established in the 1980s due to the growth of tourism industry. From the perspective of a young mother who moved there some years ago, it is amazing to live in this landscape but most important to her is that people hold together. The school burned down some months ago because a tourist’s camp-mobile, which stood next to the school, had caught fire. So tourism has become a debatable threat even for those who actually want to make a living out of it. From the perspective of reindeer herders, Leena Valkeapää explained to me, the village as a permanent settlement can be as well questioned. Due to the lack of tourism in winter all the businesses are closed, except the supermarket and the Biological Station. The next hospital is hundreds of kilometers away, as Erich Berger told us the first night. Rather stay healthy. 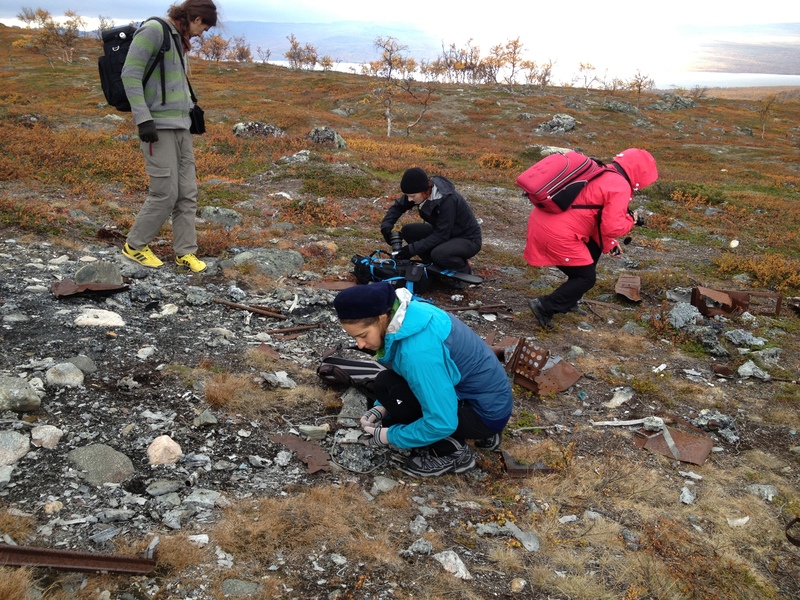 A matter of care?

Bird ringing, animal tracking, scientific tracing of climate change, researching tourists’ or lemmings’ impact on the flora, just to name a few human technologies and interactions with nature in the region - can those agencies be conceptualized by caring? Or do they belong to the rhetoric of minimizing risks of potential future threats for human species? Caring, as it seems, has been becoming a difficult term in the age of man-made history and present.

Can reindeer herders still care? Reindeer herding in Sámi society has changed through the course of history from a survivalist mode of hunting into herding in the complex arena of nation state building, environmental politics and legislation of an ethnic group, who has been forced to adapt to Western incursion, absorption and assimilation. Is the scientist, who watches a habitat for decades, as ecologist Risto Virtanen does in the Biological Station, or the activist, who fights against a Nuclear Power Plant some hundreds of kilometers away in Pyhäjoki in a more immediate act (as SO-member Tiina Prittinen has done with the Eco Anarchist Group over the last months) better at caring? Are artists who come to Kilpisjärvi better tourists? Because they herd ideas and knowledge and use their skills and technologies to parent alternative landscape narratives? Does nature understand that our artistic or theoretic intentions are better than those of a tour bus group, who aims (and paid) to experience “real Lapland”, as it was written on a bus, which we saw at a huge souvenir shop in the middle of nowhere? How does nature evaluate, absorb or adapt to different modes of intentions, interventions, ways of moving, of inhabiting and of caring? 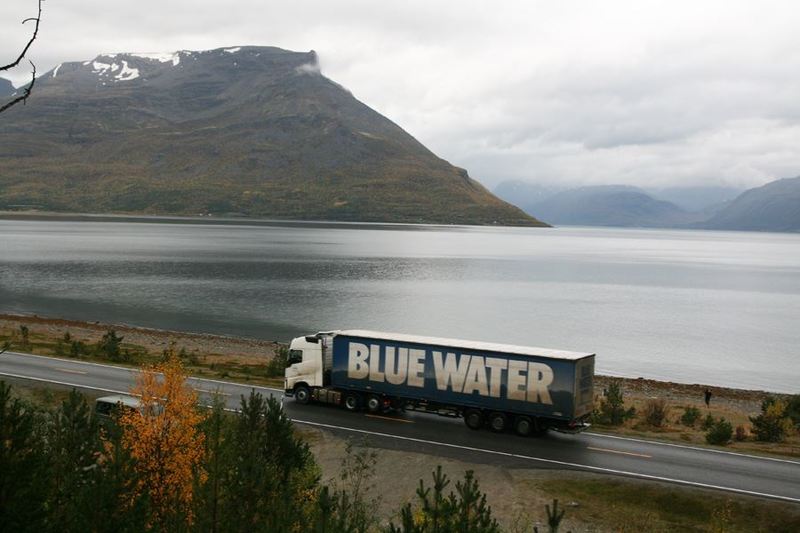 ‘Knowing’ should be replaced by ‘knowing more’, as environmentalist Thom van Dooren says in describing the difficulty of caring. ‘Knowing more’ for him articulates an ongoing, deep and at the same time self-critical conceptual knowledge, a vital practice of critique, which Michel Serres theorized with the problem of ‘exchange value’ and the role of the parasite, and of what Donna Haraway referred to as the “God Trick” of academic ‘good judgment’, that claims to provide foundations but denies its own contingency. Caring for her means becoming subject to the unsettling obligation of curiosity, which requires knowing more at the end of the day than at the beginning.

I assume ‘knowing more’ was an essential practice for all of us in Field_Notes while exploring and thinking about critical approaches to time-telling, knowledge-making and care-taking that might be called for by way of response. How might we learn to be affected in new ways; how might practices of passionate immersion create new avenues for narratives, which interfere with tidy images, coherent truths, or tales with clear edges? In this understanding what we did in Field_Notes was not so much Field Work but Field Causality Work of a dense fabric of (co-)lateral relations, correlational associations, and chains of activity, that mediates between the scales and material tendencies of environments, individuals, and collective action.